It’s Not So Silly To Be Chilly

Growing up, the book The Penguin That Hated the Cold by Barbara Brenner, played a big role in my life. At the time, I could not agree more with Pablo the Penguin’s statement, “it’s silly to be chilly”. That all changed when I got into an ice bath for the first time. I was so cold it was impossible to think of anything other than how cold it was. That, and not dying! Enduring extreme cold for even short periods of time is an intense experience. So people ask me:

The feelings you experience after exposure to cold, due to all the endorphins that are released, are so compelling that you become willing to “torment” yourself by getting cold on purpose. I mean, an ice bath is no joke. Just ask these old Irish folks who swim in the freezing ocean everyday!

Scott Carney is the author of What Doesn’t Kill Us and he explains how exposure to cold can benefit our health and recapture lost evolutionary strength. Carney shows that humans are not built for the constant homeostasis that we have created so we can sit in our comfortable chairs while fluorescent lights blaze in temperature-regulated rooms. But evolution requires human biology to experience environmental fluctuations to enhance and strengthen our nervous, immune and endocrine systems.

In What Doesn’t Kill Us, Carney sets out to debunk the famed Wim Hof, aka “The Iceman”. The Iceman holds 26 world records, including longest ice bath and fastest half marathon barefoot on ice and snow. Wim Hof attributes his success to his breathing method aptly named the Wim Hof Method. Even though the method is scientifically endorsed, Carney was skeptical. Skeptical enough to take the Wim Hof course for himself. However, after a few days of training with Hof, he felt and saw benefits and eventually went on to climb Mount Sněžka in Poland, and later, Mount Kilimanjaro in nothing but shorts, shoes and a beanie.

The Wim Hof Method is essentially a series of breathing techniques, mental conditioning and cold exposure. Hof was drawn to the cold at age 17, and his breathing techniques developed from there as the cold made him automatically start consciously breathing (similar to how women breathe during childbirth; breathing fully in and letting go effortlessly). This increases oxygen levels in the bloodstream and produces more energy, reduces stress levels and heightens the immune response that regulates pathogens (inflammatory proteins found in the blood). The latter was proven in one of Hof’s most famous scientific studies conducted by PNAS where Hof trained 12 students in conscious breathing and cold exposure for 10 days prior to the experiment. The students were then injected with an endotoxin and were able to suppress the toxin’s effects and avoid what should have been painful flu-like effects by using the breathing techniques. Hof had proven that he personally could do this but, it was the first time that others were able to do so. This study shows that we have the evolutionary ability to control and direct our autonomic nervous system and innate immune system.

Combined with gradual cold exposure, the method has been proven to produce a cascade of health benefits including reduced inflammation and stress levels, production of endorphins and more balanced hormone levels, improved sleep quality; not to mention an increase in brown adipose tissue.

Commonly referred to as brown fat, brown adipose tissue quickly heats the body by metabolizing white fat. It’s thought to have kept our ancestors, including the Neanderthals, warm during the frigid months, along with their body’s strategic muscle and fat insulators. Nowadays, with our temperature controlled rooms and ample clothing, brown fat is usually only found in newborns (to keep them warm during their early months). It decreases to almost zero in modern adults, except for those who expose themselves to the cold regularly, like Wim Hof.

Also, when exposed to cold environments, our cardiovascular system is strengthened. Tiny muscles line the arteries and veins and are used to actively pump blood throughout our bodies. These little muscles flex when exposed to any type of cold. So, for most of us who live, workout and drive in temperature controlled rooms, these miniscule muscles are never challenged and can lead to circulatory and cardiovascular problems from their lack of use.

Essentially, our love of comfort and consistent warmth (I mean, who can blame us?) has caused us to ignore the fact that variations in temperature are good for us! They make us healthier and more resilient. Evolution took what seemed to be a problem – exposure to varying temperatures – and made us incredibly resilient and turned that exposure into a health benefit. Proving once again that evolution is smarter than we are. So now, without much cold exposure, we are less of what we could be: Less healthy, less resilient and mentally not as tough.

Previous PostThe Aristocracy of Citizenship: How Different is the Nation State System from Apartheid?

Next PostChange In Warp Speed: On Acceptance and Civil Liberties In Our Time 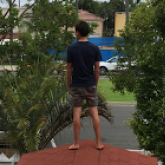